If you’re not sure which metal to choose for your jewelry, you are not alone. Here are just a few facts about platinum that we have identified as helping to distinguish it from the rest.

1. What’s the difference between platinum and white gold?

As one of the most precious metals, platinum alloys are 90%-95% pure. Platinum is also so dense that a six-inch cube would weigh about 165 pounds.
White gold is a mixture of pure 24k gold with whitening metals such as nickel or palladium (plus other metals for strength). Because gold in its natural state is yellow, white gold may be slightly yellow in appearance.
Platinum is the ideal choice for diamond settings because of its white color, great strength and durability. To improve hardness, platinum is usually alloyed with iridium or ruthenium. Creating jewelry in platinum takes longer than in gold. And, because of its purity, density and longer fabrication time, platinum can be considerably more expensive than white gold. 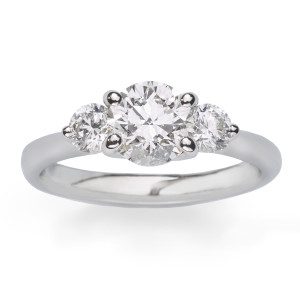 2. Why is platinum so expensive?

As one of the most rare and precious metals, platinum commands a premium price that fluctuates with market conditions. Platinum is also so dense that a six-inch cube would weigh about 165 pounds. That means that a ring made from platinum would weigh far more than the same ring would weigh if it were gold.
Besides that, platinum alloys are 90%-95% pure, whereas 14k gold is 58.5% pure gold and 18k gold is 75% pure. So a higher percentage of an item’s weight is comprised of this rare, dense valuable metal. Platinum jewelry should be stamped “PT” for pure platinum or “PT900” or “PT950,” indicating the number of parts per thousand that are pure platinum. 3. Haven’t less expensive platinum alloys, such as “585 Platinum” been introduced?

The price of platinum has risen sharply over the last few years, and is likely to continue its upward move. Platinum jewelry is popular, and manufacturers are scrambling to find lower-cost ways to meet the demand. Creating substitutes is not new. When platinum was unavailable during World War II, white gold was developed.
While “585 platinum” cuts the manufacturing price almost in half, jewelry containing a low percentage of platinum is less durable. The very quality that makes platinum uniquely suited for fine jewelry, its reliability for holding gems, is sacrificed.
Before now, the consumer has never needed to be concerned about the purity of platinum because the use of platinum group metals as alloys insured a standard quality. Now alloy is an important issue. Unlike gold, where color changes occur depending on the alloys used, producing white gold , for example, platinum jewelry looks much the same, regardless of alloys used. A knowledgeable jeweler would recognize the “585 Platinum” by its lighter weight, since it contains so much less of the very dense platinum – but the average customer would be unaware of this difference. 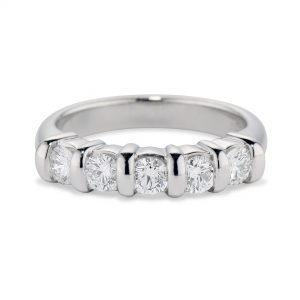 4. Then what quality markings should I look for in platinum jewelry?

Federal Trade Commission (FTC) Guides and the International Stamping Act restrict the use of the unqualified word “Platinum” (or “PT”, “PLAT.”) to describe platinum alloys that contain 850 parts per thousand (ppt), or more, of pure platinum. Any platinum alloy containing at least 950 parts per thousand (ppt) of platinum can be stamped “Platinum,” or “PLAT,” “ PT.” For alloys of platinum between 850 and 950 ppt, “Platinum” must be accompanied by the purity. For instance 90% Platinum-10% Iridium must be stamped “Platinum 900”.
The FTC Guides do not mention the new platinum alloys. Since it’s likely that jewelry made of the new alloys will become widespread, many dealers in fine jewelry are working to update the FTC Guides.
Recently the Jewelers’ Vigilance Committee (JVC), the American Gem Society (AGS), Jewelers of America (JA), and Manufacturing Jewelers & Silversmiths of America (MJSA), associations dedicated to consumer confidence in our industry, made recommendations to the FTC. All took the view that if the accepted and traditional use of the term “platinum” were allowed to be used to describe an alloy comprised of less than 850 parts per thousand pure platinum and no other platinum group metal (PGM), there was an increased risk of consumer deception.
Consumer messages and educational material about platinum have been consistent over time – platinum is pure, durable, strong, heavy, hypoallergenic and distinguished from all other precious metals. Allowing the word platinum to be used to describe a product with a low level of pure platinum that may not have all these characteristics could lead to sellers taking advantage of the understood characteristics of platinum without providing that quality. Specifically, the associations stated that the FTC Guidelines should be revised to prohibit the use of the term “platinum” or any abbreviation or version thereof to mark, market or describe an alloy consisting of less than 850 parts per thousand pure platinum and no other PGM.

We’d love to talk to you and show you the remarkable metal that is platinum. Feel free to visit our showroom nestled in the heart of the Freeport, Maine outlets. Or browse our engagement rings to see a variety of settings in platinum and gold.