One of the many features of this roller-ball pen is a light structure in aerospace grade titanium and aluminum. The barrel is then fitted with Gary Green petrified wood. This beautiful writing instrument also features William Henry’s patent-pending Wavelock™ cap closure system – a ring of chromium steel balls embedded in a titanium ring which are captured in wave-shaped grooves in titanium collars for closed and post positions. Additional accents on the carbon fiber cap are in mokume and sterling silver. The pocket clip is set with a white topaz gemstone.

Only 1 left in stock

The Cabernet ‘Petrified’ is a mesmerizing rollerball pen featuring a barrel in Gary Green petrified wood, and a light structure in aerospace grade titanium and aluminum. The accents on the carbon fiber cap are in mokume and sterling silver; the pocket clip is set with a white topaz gemstone. This beautiful writing instrument also features William Henry’s patent-pending Wavelock™ cap closure system – a ring of chromium steel balls embedded in a titanium ring which are captured in wave-shaped grooves in titanium collars for closed and post positions.

The Cabernet ‘Petrified’ is one of William Henry’s most exclusive writing instruments, each one imbued with a distinct and unique personality. 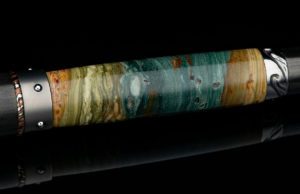 Mokume gane was developed in the 1600s in Japan, allegedly by an Akita prefecture metalsmith named Denbei Shoami (1651 to 1728). He used the mokume gane technique to dress up samurai swords.
The mokume gane technique involves fusing several layers of different metals, and artistically exposing sections of lower layers. The metal is often made to display a pattern that mimics wood grain. A variety of metals can be used to give different arrays of coloration.
Layers of metal are pressed together and fused with heat. The forged layers are carved to expose lower layers and are then pressed again. The carving and pressing is repeated to develop the pattern.

Today, some of the finest mokume in the world is made here in the USA, and William Henry is proud to offer a range of this material on our collections. Our mokume is generally made with copper, brass, and nickel silver in either a 45 or 89 layer billet, forged and patterned by hand.

Carbon fiber is a material consisting of microscopic fibers composed mostly of carbon atoms. The carbon atoms are bonded together in crystals that are more or less aligned parallel to the long axis of the fiber. The crystal alignment gives the fiber high strength-to-volume ratio. Several thousand carbon fibers are bundled together to form a tow, which may be used by itself or woven into a fabric.
Carbon fiber’s properties, such as high stiffness, high tensile strength, low weight, high chemical resistance, high temperature tolerance, make them very popular in aerospace, civil engineering, military, competition sports. William Henry uses the highest grade, and beautifully textured carbon fiber for its collections of jewelry, knives, money clips and cufflinks.

Topaz is a rare, extremely hard gemstone with an exceptionally wide color range that, besides brown, includes various tones and saturations of blue, green, yellow, orange, red, pink, and purple.
The ancient Greeks believed that topaz gave them strength. In Europe during the Renaissance (the period from the 1300s to the 1600s) people thought that topaz could break magic spells and dispel anger. For centuries, many people in India have believed that topaz worn above the heart assures long life, beauty, and intelligence. 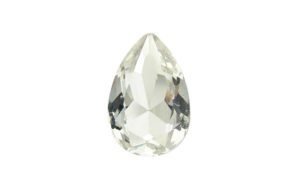 Today, topaz is one of the US birthstones for November, while blue topaz is a birthstone for December

Visit us in our Freeport, Maine showroom to see our full collection of gifts including Pens, Knives and Money clips.